Here’s a little Zita watercolor I made during the CapCons event last weekend: 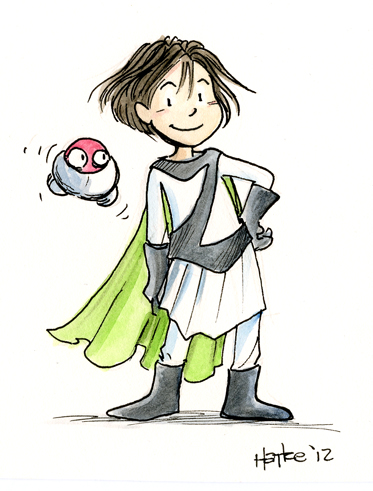 From around the internet today:

The Zita books made it on to the BoingBoing holiday gift guide. This guide has some shockingly cool stuff. Thanks to that guide I have discovered UNCUFF LINKS. “Brilliant” does not begin to cover that idea.

Legends Of Zita was listed on the School Library Journal’s 10 Best Graphic Novels of 2012. Yay!

My Justice League redesigns were featured on Project: Rooftop and met with less-than-universal approval! Everyone has different ideas about what makes a good costume for these guys. It seems like my Martian Manhunter was the most well received. The Flash was definitely the most reviled.

Finally, it looks like I’m just not going to be able to get the third volume of my Journal comics put together in time for Christmas. I’m disappointed, but I just ran out of time this year. Or, to be more honest, I guess I used up all my “extra project time” drawing superheroes. I had this problem in school too.

Copies of the first and second volumes of Hatke Family Adventures are still available.