Okay this is probably the last one of these, at least for awhile. Redesigning these characters has been a great creative exercise, but I really should be pouring more of this energy into the book I'm currently chipping away at.

So here he is, Batman's secret weapon, his ace-in-the-hole, Robin the Boy Wonder: 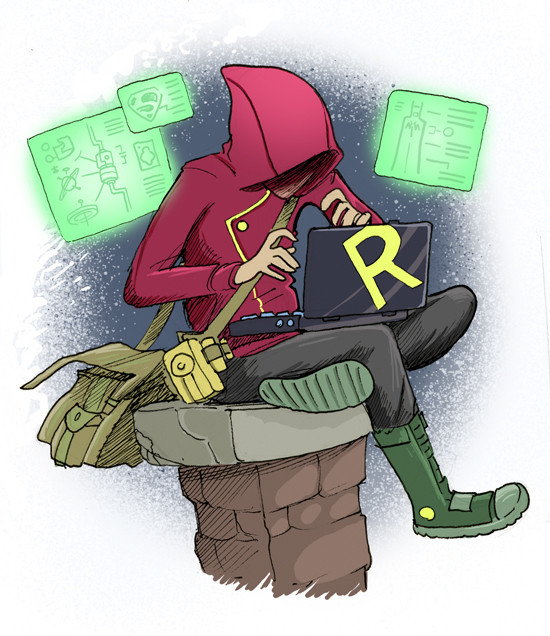 How can the Batman cause the lights to go out over a city block just when it is most convenient? How does he know the whereabouts of high profile criminals from miles away? Why does he never show up on film, even when those standing around him do? Why does nearly all technology seem to bend to suit Bruce Wayne’s needs?

The answer is Robin, the “Boy Wonder.” A mysterious hacker-savant who just appeared in the cave below Wayne Manor one day and, without a word of explanation, began building a very powerful computer, and using it to do the most amazing things...

Bruce still doesn’t have any idea who the boy is or where he came from.

The boy calls himself “Robin” and Batman doesn’t trust him at all.

A couple notes on this Robin:

1. This is not Dick Grayson.

2. Hacking is a funny trope these days, with characters using the “power of hack” to do all sorts of crazy impossible stuff. This kid probably has a strange technological meta-ability similar to Gary’s ability on Alphas. So it’s computer-magic. I even had this thought that the laptop he carries might just be a prop.

3. Probably this strange kid will eventually break away from Batman and become Oracle.
---

Oh, and we have another poem from Mr. Riley! This one is called Zeroing In.