The Flash (and a comic) 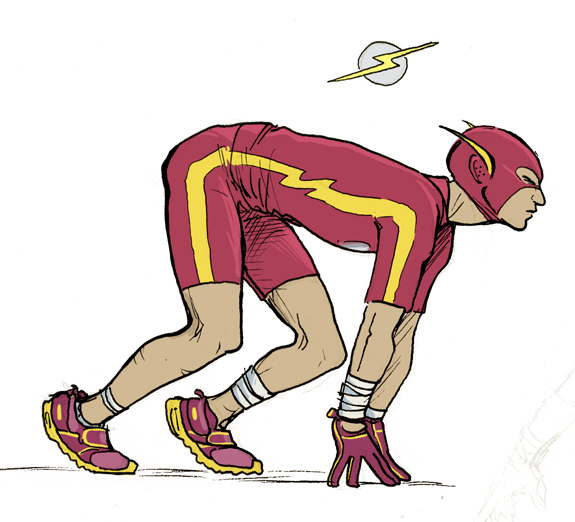 I like the idea of a Flash that starts out as a runner, even before he gets his powers. So with this in mind...

For a time, Barry Allen really was the fastest man alive. A consummate runner he briefly held the record for the fastest mile run. In a publicity venture later that year, the Fastest Man Alive was invited to a European laboratory to witness “the Fastest Particle in the Universe” in an experiment that hoped to accelerate particles far beyond the speed of light.

The experiment was a disaster. The particle accelerator malfunctioned catastrophically, and when the dust cleared Barry Allen was nowhere to be seen. The whole incident was hushed up.

Barry woke up alone on a desert island in the Pacific. Having been bombarded by strange Speed Force particles he finds he can move faster than ever before, and that he can slow down his perception of time. But his powers are only in their infancy and in order to survive on the island he must become more than just a runner. (I imagine the island scenes being a bit like the movie “Cast Away.”) One day his powers enhance to the point that he can run on the surface of the water and this brings hope for escape...

Of all the Justice League characters, The Flash is the one who would really wear lycra or spandex. And for the design I looked up a bunch of sprinters online, then added a pull on mask, and gloves because he’s doing more than just running a race. Barry’s quick, but not invincible, so I imagine him as always taping up nicks and cuts. I also figure he goes through a dozen pairs of shoes a week.

On another note entirely, here's a little comic I made for Anna about the phases I go through when I finish a book: