Oh man, you guys! Our friend and poet, Mr. Tom Riley, has been writing a few poems to go along with some of these heroes. Do yourself a favor and read 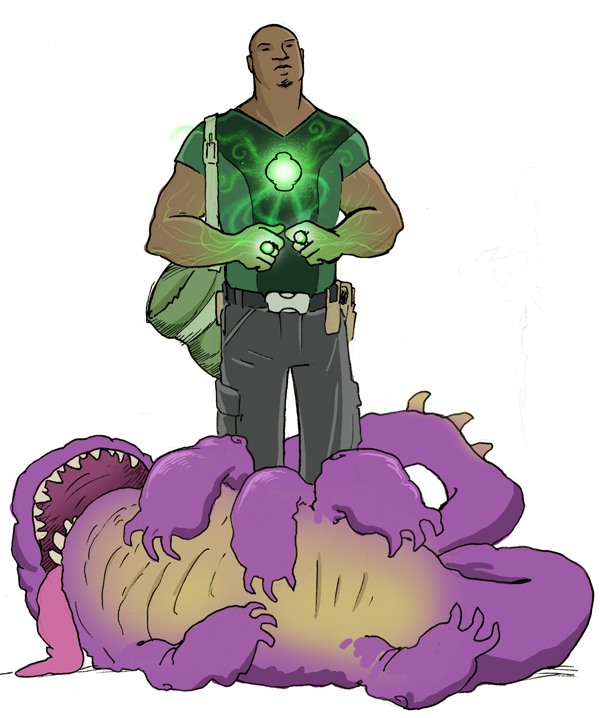 John Stewart started out as one of New York’s Finest until one day the tough cop was tapped to join the ranks of the World’s Finest -a secret government organization that monitors extra terrestrial activity on Earth. A new world opened up to Stewart as he began spending his days hunting down rogue aliens in the mean streets of the worlds major cities. (think Die Hard’s John McClane meets Men In Black).

But Stewart soon begins to suspect that the Agency is rotten at the core. Some of the raids enacted by the Agency seem wrong ...and then a certain smiling red-caped hero appears on the Prime Target list. The Agency’s Director, Lex Luthor, seems increasingly unbalanced.

So Stewart takes it upon himself to break into the Agency’s most secret location -the Vault in Area 51, and there he finds their great secret: purple skinned alien Abin Sur who crashed to earth in the 40s and has been kept barely alive since. Sur is a Lantern, but the agency has been using him as a power source for all their weaponry.

When Abin Sur sees John Stewart trying to rescue him, he sees the thing he has been waiting for for 60 years. A hero. Abin Sur bequeaths the Lantern, and it’s two power rings, to Stewart. Abin Sur dies as the lantern sears itself into Stewarts chest. The lantern is weak, but it gives the cop just enough power to escape the Agency’s clutches.

Now he’s a rogue agent, a fugitive hunted by the agency he once worked for, and moving among the alien underground he once persecuted. And now, when he looks up at the stars, he feels something calling to him...

This has been the hardest design so far because it’s very different from the original, and the original Lantern costume (the Hal Jordan one) is great. My Green Lantern is going for a sort of Jason Bourne look and I imagine his story will have a Bourne feel, until he finally escapes the Earth and discovers the rest of the Lantern Corps. Of course the most noticeable thing is that the lantern is in his chest (like Tony Stark’s arc reactor) and I gave him two rings to even things out. One for each fist.

The classic imagination powers are, at this stage, latent.

OH DC COMICS PLEASE LET ME DO THIS AS A TEN ISSUE MINISERIES.