I was a little off this weekend. I had intended to write today about our fun family trip to the flea market -and it was a fun Saturday, selling all our extra gipsy knickknacks and a few useful things like back pack carriers. I also sold several copies of my books, which was nice. We even went out afterwards and filled up on hamburgers and french fries at Spelunkers. The Flea market is full of odd and interesting characters. One guy bought a few of our interestingly shaped bottles. He told me he was an alchemist. Our table was also visited by a beautiful parrot. 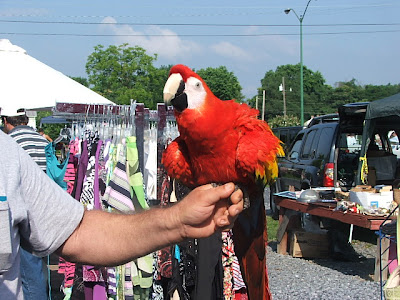 But the weekend ended on a sour note last night. I was tired, but I wandered down to the neighbor’s house, just to say hello. They had a sickly black lamb. It was light and weak and you could feel its little ribs. It was a beautiful jet black color. They were pretty sure it wasn’t going to make it, but there was a bottle nearby with maybe a shot glass full of milk left in it. I thought “why not?” and I squeezed a little milk into the lambs mouth and felt him swallow it. I was encouraged. Maybe I could save this lamb! They mixed me up a more full bottle of “Lamb-Saver” and I tried to feed it some more. Squeezing the milk into it’s mouth bit by bit. For a couple minutes everything seemed to be going okay, but then I felt the lamb go limp and the milk was coming out of his mouth instead of going in. Somehow I had killed it. Probably by not paying close enough attention to whether it was swallowing the milk or not. It was sudden and sad and more than a little embarrassing because, after all, it was not my lamb. It was like going to someone’s house and killing their pet.

On an unrelated note, I came back from New Orleans last week with several extra copies of both Zita the Spacegirl and Tales from the Bohemian Highway. I imagine most of my regular guests on this blog have already picked up a copy of one or both of the books, but they're here in the shop if you're interested.
Posted by Ben Hatke at 5:56 AM