Things I thought I'd Never Do: Paint a still life. But, thanks to visiting artist, Henry Wingate, now I have: 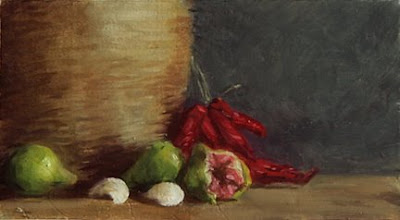 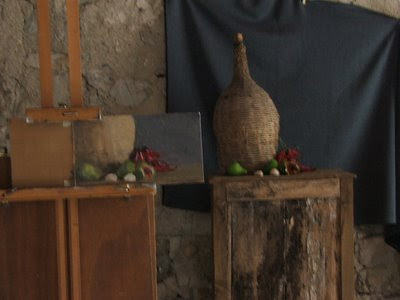 The figs were plucked from the tree near the house. The basket wraps around a wine bottle and was probably made by Anna's grandfather (we found it in an old cantina).

Most of the paintings I've worked on lately have been small pieces painted on wood panels. I had never considered painting on panel until some friends left me a small stack of them after a visit. It's a different feel from canvas, a little slicker and without the give of mounted fabric, and I almost like it better. It's certainly nice for small pieces.

I've read that originally oil paintings were all made on panel but that, in Venice, where there is a lot of moisture in the air, the panels started to warp. Stretched canvas was the solution to the warping and later became the norm.

Edit: I managed to get a better picture of the figs, so I've replaced one of the pictures in this post. And I removed the picture of my messy worktable. Gotta keep up appearances.
Posted by Ben Hatke at 7:46 AM