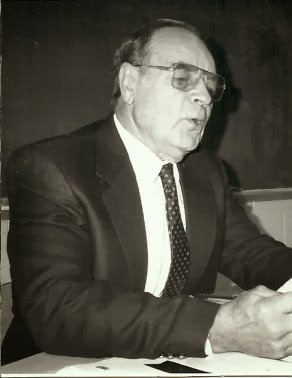 One of the Legendary Figures in my life has passed on from our sad old world.

Mr. Bob Butz, Leo Robertus, the Roaring Lion: he was one of my greatest teachers and someone who was a shining example of what an artist can and should be.  He taught Latin and he taught a class in Etymology that woke me up to the fascinating power of words, and the stories of where those words come from.

He was builder and a mason -a barrel-chested man who was as strong as the stone he worked.  I spent a summer working with him, building stone walls and steps, and I will never forget the day he grabbed a sledgehammer from me and showed me how you really use it.  It was terrifying.

And he had hands -strong calloused, gnarled hands that created wonders (though he was quick to tell me that art was not in the hands but in the eye "because you can train your hands to do anything").  Mr. Butz was a sculptor, a painter, a set designer and a draftsman.

Mr. Butz was the first person to encourage me to draw and then tell me my drawing was terrible and that I could do better.  And he was right.  He pushed me gently, but seriously forward.  He taught me when I was very young but he always treated me as if the only difference between us was experience.

And he had faith.  When I was in high school he still traveled every year to Lourdes to spend a week carrying the very sick in and out of the waters there.  He did this even after having both of his own knees replaced.

When I graduated from high school he gave me a mounted photo of a wood carving he had made. It's a somber Face of Christ carved from a block of walnut.  The photo has looked over almost every drawing table I've worked from since:

The letter on the back reads:

I've enjoyed working with you in grade school, Jr. Hi and High School.  We've been exchanging our work for some time now, so you can add this to your Butz Collection as a memento of all the good times we've shared.

The carving is in walnut (finished and rough-cut) and rests in the Bureau Medical in Lourdes.  The inscription in French means "Consummatum Est" from our Latin Class.

Have a full and bright future!

The Roaring Lion lived a life that was intellectually and artistically rich and he made a gift of that life. 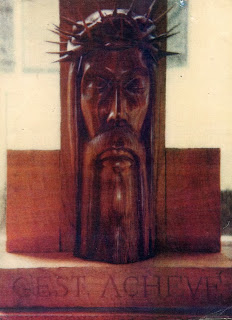