Cop on the Beat

It's an improvement on the old Lantern Oath, I think...

So We've seen The Cop, now how about a look at The Outlaw, DC's other "green" hero: 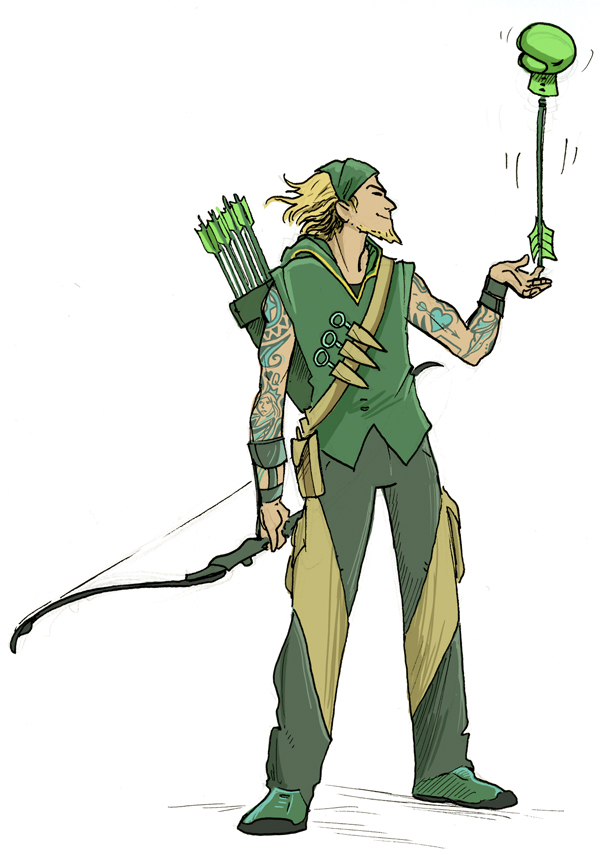 Oliver Queen was born in a lab -the product of a genetic experiment aimed at creating five perfect assassins. Each child in the Royal Flush Project was bred with heightened reflexes and vision, muscle control, tactical prowess and a superhuman targeting ability.

But little Ollie was not like the others. Good tempered and caring even as an infant, he won the heart of one of the geneticists who smuggled him out of the lab one day and passed him off to a traveling circus -the only people who would take in a child with no documentation. And so Ollie found a better life.

Life with the circus was good, and he was a show-stopper with his knife throwing and trick arrow displays. But as he traveled from town to town, seeing more of the world, he became aware of injustice and enforced inequalities. Oliver began to feel that he should do more with his abilities than entertain a crowd. And then one day he saw a red-caped man who could fly, and he knew what he should do.

But the people Ollie wanted to fight for were often victimized by the very institutions that were supposed to protect them. So Oliver Queen became an outlaw. Now he fights for the little guys against abusive corporations, corrupt law enforcement and “legitimate businesses.”

And he’s been noticed.

Four perfect assassins have been put on his trail...

My version of the Green Arrow is superpowered. Partly this is because I want Batman to be the only non-powered guy in the group and partly because it’s way more awesomer. I gave him loose pants, tattoos and I went for a sort of parkour vibe because this version has some extra physical abilities.

I like the idea of a modern Robin Hood but I think one of the things that works with Robin Hood is to remember that he’s on the wrong side of The Law and that he’s cool with that. The most memorable Robin Hoods, I believe, are the stylish and cocky Robin Hoods. This version totally ends with Ollie leading a motorcycle gang.