Going through old files today I came upon this old story. It's one of the silliest things i've ever written. Maybe you'll like it!

Dragon and Muffin Roast a Turkey

Dragon and Muffin were preparing for dinner.

Dragon rinsed the turkey and rubbed it with salt and spices.

"The flesh of this turkey will be savory and delicious," said Dragon.

Next dragon got a big bowl from his cupboard and began mixing the ingredients for stuffing. He cut up oranges, lemons, apples and onions and put them in the bowl. He added cranberries and raisins to the bowl. He also threw in a dash of cloves.

"this stuffing will not stick together" said dragon. "It is missing something."

"Yes!" Said Muffin. (breadcrumbs was what he was going to say).

Dragon looked in the bread box, but it was empty. He looked in the cupboard too, but he didn't find any breadcrumbs. "this stuffing will not be savory or delicious without breadcrumbs," said dragon, and he shed a tear.

Muffin wanted to be helpful. "I am made of breadcrumbs," he said.

Dragon mixed his friend into the bowl and it gave the stuffing a wonderful consistency. He roasted the turkey until the delightful small of it filled his kitchen and then he sat down for a quiet dinner.

As he ate he remembered good times with his friends. 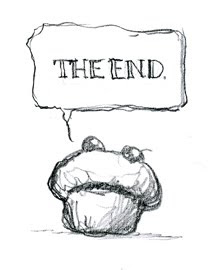