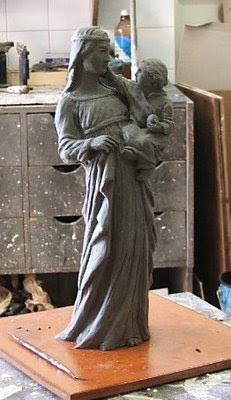 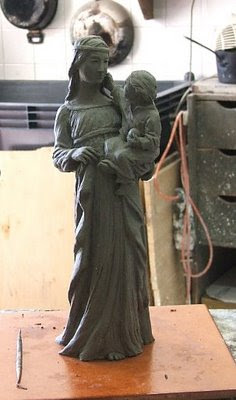 For the last few months I have been using my spare moments to work on this small Madonna and Child statue (spare moments, by the way, are like all those little fractions of pennies from Superman III. If you add them all together they're worth BILLIONS).

For a model, I began by using a picture of an obscure 1930s forgery -a wooden statue that was made to look as if it had come from the 1500s. If you think you've seen "distressed," think again. After getting a general pose I sort of took off on my own into the unknown.

The statue is made of plasticine clay, which is a marvelous kind of non-drying clay. It's very handy if you plan to work on something over a long period of time. It reacts to heat rather than moisture, which I also like. And I have nostalgic memories of the smell from working with Mr. Armstrong.

Now I had planned to have this cast in bronze if it turned out well, so earlier this week I dropped it off at a foundry outside of Florence. And by "dropped it off" I mean I carried the soft clay statue, on a hot day, in my hands, on a 4 hour car/train/bus ride that finally made me understand what poor Mrs. Bennet was talking about when she says "my nerves! My poor nerves!" The pictures above were taken just before I left the foundry. My last look at the statue.

Sadly, in the end there was simply not enough time to have the bronzes made (the process would have included several more trips to Florence). But I did purchase the mold so that I can have them made in the future. Someday!
Posted by Ben Hatke at 9:23 AM