This weekend we watched on of my all-time favorite movies, Kiki's Delivery Service. Kiki's is a beautifully animated Studio Ghibli film about a young witch striking off on her own for the first time. It captures that transition between childhood and adolescence -that special magic time that usually lasts one summer. The setting is also achingly beautiful: taking place in the late 80s, in a small unnamed European city, but (and this is the interesting part) in an imagined world where World War II never happened.

Unfortunately, while being one of my favorite films, it's also one I have a hard time watching. This is mostly because the Disney translation is so crummy -being too often used as a vehicle for the Late Phil Hartman to wisecrack. Many of the films quiet moments are, in the english translation, crowded with dialogue. The whole mentality is "never let the characters stop talking"

Take, for instance, the scene where Kiki flies into the city for the first time. In the original version the scene is almost dialogue free and, for animation, there is a surprising amount of sublety in the acting. You get a sense of the bustle of the city and you can see that Kiki is both excited and a little overwhelmed. But Disney in their infinite wisdome, realized that the film might be shown to hundreds upon hundreds of lobotomized apes and so they rewrote the script to have the characters (Kiki and her cat, Jiji) painfully describe everything they see. Here is the actual dialogue from a scene that was originally dialogue free:

"Where are we going now Kiki?"
"The Clocktower! I bet you can see the whole city from there!"
"there's SO many buildings!"
"There ARE a lot of buildings, yes."
"GASP! Jiji! Look at all the cars!"
"Yes. Lots and LOTS of cars"
"And the MARKET!"
"With much hustling and bustling, yes."
"Oh, Jiji, it's so amazing! And, and just look! Look how many people there are!"
"Too many if you ask me!"

My goodness. So painful. Keep in mind that Kiki is voiced here by Kirsten Dunst.

And to keep an art-blog honest: Here's a piece I finished over the weekend. A variation on the scribble from the last post, this is one of those rare drawings made for no reason in particular: 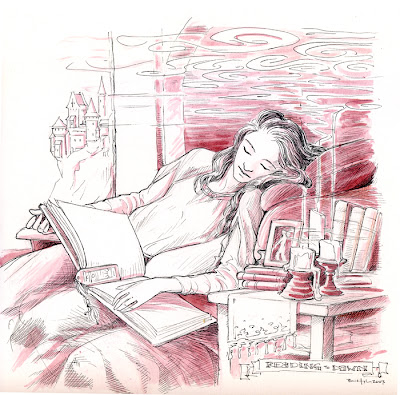 I thought briefly about putting this up on ebay but then I thought better of it.
Posted by Ben Hatke at 11:24 AM