Well, it's been almost a week between updates. No, I didn't "disapparate"! I had a sudden opportunity to take Angelica on a weekend long bikeride. Two days of camping and two days of riding. Angelica and I rode on my friend Mike's extratandem bike (Mike takes his two girls on a triple bike). Angelica pedaled all day like a trooper and in two days we covered nearly 50 miles. It was great. Hopefully i'll have pictures of the adventure soon.

In the meantime, for those of you who brought up Harry Potter in the last post (you know who you are), here's a drawing I did of ol' Harry himself. Just in time for Halloween! How does he compare with how you imagine the character? I imagine he's round about his third or fourth year here. 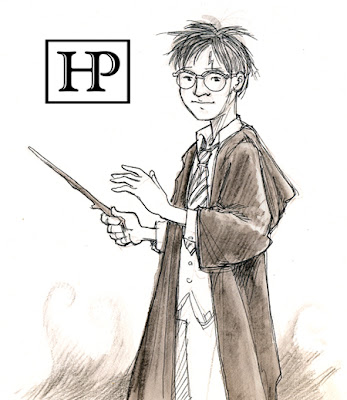