Lessons from a Goat

How did it come to this?

In my experience this is the kind of question you ask yourself on a steamy August morning when you have your arms around a urine-soaked goat, when the smell is ripe, and you’re struggling to hoist it into a makeshift harness hanging from the rafters.

I never intended to have goats in my life. They just sort of wandered in.

Well, the truth is that we do have a nice, flat yard. And we had a pretty aggressive and thorny blackberry hedge growing along the back fence. So when some friends sold their old Virginia farm and moved into town we took on their goats. There were three white females and old Gruffy.

We’re gonna come back to Gruffy.

We put up a solar powered electric fence to keep them from wandering off. The fence never seemed to work, and I also never really understood how it worked. We also didn’t know that two of the three females were pregnant. I found that out when my daughter called me one Saturday as I was driving back from yoga, to say that something was …happening with one of the goats. That was an interesting Saturday.

So then for awhile we had baby goats, and they were cute. I mean aggressively cute. It wasn’t natural. But they were also impossible to contain. They were no end of trouble.

So we ended up giving all the goats, except for old Gruffy, to a family that was much more equipped to care for them (as we were loading them for transport, one of the baby goats gave me a parting gift of getting loose and head-butting the crap out of my van’s windshield).

All that was a few years ago. Since then it’s just been Gruffy and his special lady friend. His special lady friend is a sheep, by the way. She's sweet and fluffy, and I find their relationship charming as hell. (I’m the last one to separate the sheep and the goats.) I still grumbled about having a goat in my yard, though. You know, from time to time...

Then, in the hottest part of this last summer, Gruffy got sick.

He stopped eating. He lost clumps of hair. He got terribly, terribly thin. He stopped standing up.

He was in pretty bad shape when I put him on a tarp and dragged him from the back of the field to the shade in the tree by the back door. I was pretty sure he had parasites, so I bought goat dewormer and fed it to him. It didn’t seem to help. I was pretty sure Gruffy was going to die.

What do you do with a dead goat? I wondered.

We called a vet to come look at him.

The vet arrived in a big, white truck. He was just what you’d hope for in a country vet—calm and friendly, but not chatty—clearly more interested in the animal than the people connected to it. He gave Gruffy a shot of *real* medicine (apparently it was amateur hour with my deworming pellets). And then he told us that Gruffy might recover, but he really was in pretty bad shape. And he told us what we’d have to do for the goat every day.

And so I found myself, in the back half of August, working with Gruffy every day. It wasn’t just feeding and watering. He needed to be lifted up and held in a standing position. He needed his legs massaged to get the blood back into them. He needed to relearn how to walk. Even when laying down he needed to be flipped from one side to another throughout the day. In the mornings he was soaked in his own filth. He smelled just awful.

I washed up as much as I could but Gruffy had a pungency that really stuck to you. You’d get little whiffs of it.

I grumbled a lot. Sometimes to myself, but more often out loud. But I wasn’t working alone. We all worked together to help Gruffy. I was just the most complainy about it.

Eventually we dragged him into a shed and I rigged a sort of harness from the rafters so that he could stand for longer stretches of time without having me right there to stop him from falling. We gathered branches of vitamin-rich leaves to feed him.

And he got better. He started walking on his own. He stopped needing the harness. He fattened back up.

We had a nice, sturdy fence installed to enclose the field. A proper farm fence.

Gruffy is out there now, with his lady friend (her name is Stella). They are munching happily on Autumn grass. It’s all pretty damn idyllic. I even made them supporting characters in the book I’m working on (under different names—the last thing I need is a legal battle with farm animals).

How did it come to this?

I don’t actually think there’s a better question. I think it’s just about whether or not you can laugh when you ask it. 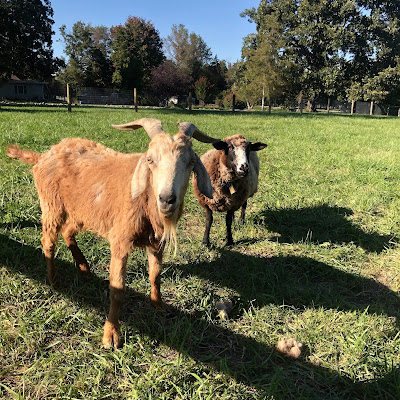