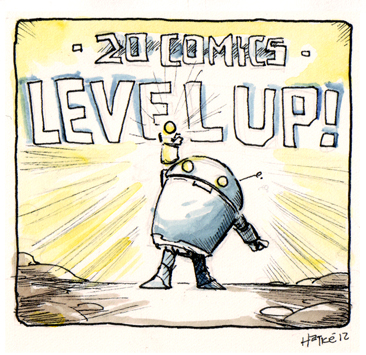 Well, well, well. Happy Twentieth Comic Little Robot! I never expected you to make it this far. You continue to surprise me.

I started these little comic strips on a whim. In fact, it feels like I drew the first one on something less than a whim and so far I've kind of avoided setting any goals for this character. It's been a sketchbook experiment of sorts and, rather than setting up a schedule, I decided to try to make this something I drew when I wanted to. It's not a predictable way to post web comics, but it's been enjoyable.

Anyway, I like this guy. I like poking my brain into my sketchbook and seeing what he's up to. I think the Little Robot's gonna stick around for awhile.