Ponyo (and another Mouse) 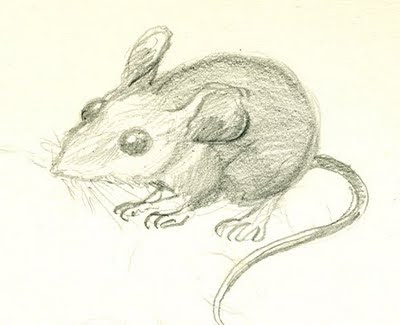 Another mouse, they have such funny proportions! This one was drawn directly from life. I found him in the middle of the night, a tiny little thing -he had fallen into a bag of cat food and couldn’t get out. We kept him in a bucket for a day, fed him cheese, and let him go far from the house.

We took a family outing to see Ponyo on a Cliff by the Sea this weekend and it was utterly fantastic. It was a tribute to hand drawn animation at a time when so many studios have forgotten things like beauty and story and just seize on whatever effects fad is most current (OMG 3D!!). The peaceful beauty of Ponyo was thrown into even sharper relief because the film began after a string of frenetic mind-numbing, over-the-top previews. As soon as the simple Studio Ghibli logo filled the screen you could take a breath and watch a film where every panel was lovingly drawn by hand. Ponyo was like watching your favorite picturebook brought to life.
Posted by Ben Hatke at 5:47 AM