I think we should all conveniently forget about my idea of posting a new comic every day. This morning I made a comic about traveling back in time on Saint Patrick’s day, visiting my younger self, and replacing Young Ben’s corned beef and cabbage with a guinness. It was okay.

Instead of a comic here’s a process picture from the early stages of the Zita the Spacegirl cover illustration. 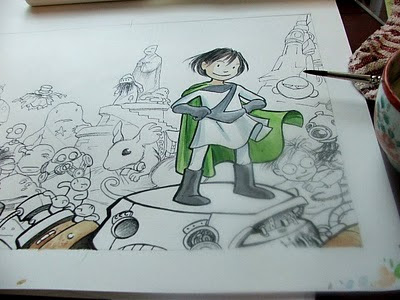 I hope to be able to post the final cover up here soon, because I’m pretty pleased with how it turned out.

RECOMMENDED FILM: Man on a Wire: a documentary story about Philippe Petit, the man who walked a tightrope between New York's twin towers in 1974. Absolutely, terrifyingly amazing.
Posted by Ben Hatke at 6:22 AM