I made an afternoon trip to the Small Press Expo in Bethesda the other week and it was a fun and interesting time. I finally got to meet Joey Weiser, from Flight, and I spoke briefly with Anthony who makes these hilarious comics about Reginald and Bertato.

One of the fun things I brought home was Life Meter 3, and anthology of comics inspired by classic video games. I can’t think of any other place where you could find a comic about Joust or Oregon Trail. Dave Roman, who is the editor of the anthology, used my Legend of Zelda illustration for the cover! Check it out: 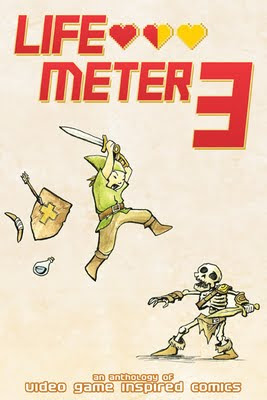 ...Man I used to think Joust was the coolest game.
Posted by Ben Hatke at 6:33 AM